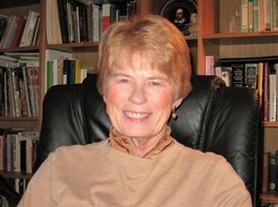 Deciding to enroll as a mature student at Trent University in the 1990s turned out to be one of the defining moments of the second half of my life.

While pursuing an English degree, I met Dr. Sarah Keefer, Professor of Medieval Literature at Trent. Her enthusiastic and erudite teaching style sparked a profound and enduring interest in the literature, history and people of Anglo-Saxon Britain. During my honours year, I was offered the opportunity to write a thesis on religious royal and noble women and their impact on literacy during the years between 600 and 1100 C.E. Dr. Keefer very kindly served as thesis advisor and arranged for the assistance of Dr. Stephanie Hollis of the University of Auckland, New Zealand as second reader. I am very grateful to both of these women for the time and energy they expended on my behalf.

After earning my Honours Bachelor of Arts degree, I returned home to Orillia and spent several years renovating an 1870s home while working part-time. During this period, some good-hearted friends took a chance on my skills and hired me to do renovations in their homes. But my Anglo-Saxon women friends remained firmly lodged in my mind, even speaking to me occasionally while I spent endless hours alone plying a paint roller or filling and sanding drywall seams. During this time, I conceived  the idea for a historical novel and I began to work on Fire in the Spirit.  A mere ten years later it was done.

Although I was born and raised in Toronto, I have lived in Orillia, Ontario since 1965 when I moved there with my husband.

Over the years, our family of three fine sons has grown to include wonderful daughters-in-law, two engaging grandchildren and several exuberant granddogs. Their humour, intellect and love of life infuses joy into all of our family gatherings.

Throughout my life, I have been fortunate enough to travel to many parts of North America, Continental Europe,  and, of course, England where I have visited several of the places featured in Fire in the Spirit.
contact
Powered by